Q & A With Mrs. Stanescu 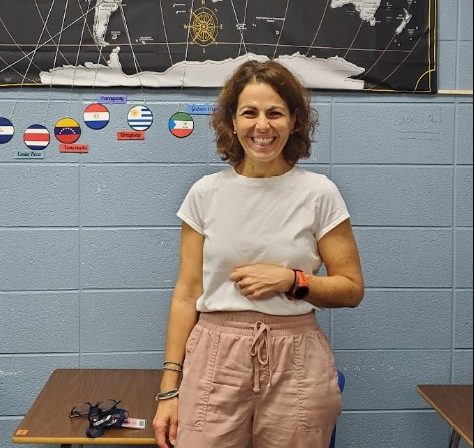 This interview has been edited for clarity.

What specifically drew you to becoming a teacher?

Well… it was just giving back to the community that opened the door for me and my family when we needed it. And a way that I found to give back to my country of residence that gave me this opportunity (for an education), would be to serve as a teacher and to help kids have what a majority of people in my country (Venezuela) could not get.

What made you want to teach here at Clements High School, instead of somewhere else?

I have been working in special ed and behavior programs, but as a paraprofessional, Fort Bend ISD has a program called District of Innovation, and because of my degree I could apply to a position that was hard to fulfill, like a Spanish teacher. And because there was a teacher that quit in the middle of the summer, Mr. Yaffie called me, and I was accepted in the District of Innovation. Currently, I am really happy with the decision, as it would allow me to interact with teens, instead of “small children,” so… yes, because of the opportunity that was presented itself, I agreed, as it was not simply because of the status Clements held. In addition, I also thought: ‘What’s better than being in your kids’ school, which was home to my daughter, and now my son and his friends?’

Is there anything you look forward to teaching here at Clements?

Well… let us say that my goal for this year is if I can change at least one student’s life, who really needs it, I will feel as though I upheld my duty as a teacher. That is my goal for teaching here at Clements.

What part of being a teacher motivates you the most?

Interaction with teenagers, and achieving those ‘aha’ moments, when you are teaching something, and they seem to grasp that thing you are explaining. It is just amazing to see, and it feels good to have that reassurance that you are doing something right thing.

What is your teaching philosophy?

My teaching philosophy revolves around respect, as I try to, no matter what, respect the point of view of my students. In addition, I try to talk to them and reach them in a way that there is an open space, in which they can give me feedback when I am doing something that makes them feel uncomfortable… that is one. Another point is being prepared and to be ready, as it kind of goes with respect, because if you are not ready as a teacher it is disrespectful towards the students when you don’t know what to do and are clueless about what to do. Long story short, to me it comes to communication, respect, and preparation.

What brought you and your family here to America?

Like what I said before, it’s part of why I became a teacher. You know, we were looking for a better future for our children as well as ourselves. We wanted to give them a chance, which in Venezuela, they could not have… and that’s basically why we moved, as we also thought it was time for us to start looking for other places to live and feel safe. I remember the first day when Andrea [her daughter] walked from First Colony Middle School by herself back home, she had such a big smile on her face. Because she really felt as though she had accomplished something that most people take for granted, being in a safe environment. In Venezuela, you would not be allowed to be in a mall by yourself, go to school, or even get ice cream one block away.

So far, how have your first three weeks of teaching here at Clements been like?

What traits/characteristics do you possess, that makes you feel like qualified being a teacher?

I think it comes down to my compassion, respect for others, creative nature, and curiosity for learning more. As when you are a creative person, someone who is compassionate, and when you just want to do things right and give others the opportunity to be successful, not just your kids. That is what I believe makes someone qualified to be working with “kids.”

What is one thing you haven’t shared with your students, that you would like to tell them?

I am who I am, and I will not be a different person in front of my students. In the sense I will not pretend to be a harsh person, or as someone who does not care; when on the other hand I do care and am not hard on them. So, they know that they’ll have what I am, and I am human, I just told them that I am a human being and I do make many mistakes, and I am not afraid to admit what I have done wrong.

What is one piece of advice you would give to the students here at Clements, regardless of grade level?

One piece of advice I could give to any student is to have balance in life, I can see a majority of my students getting little sleep and feeling exhausted because they may go to bed at 2:AM just to prepare for a test. But this is not everything in life, and everything you experience will carry you through to where you will be, and even if you are part of the top three percent of students, what you will study and prepare for will usually not be your final career/occupation for the rest of your if. I am an example of this, I do not know how many days I spent during my college years with little sleep, deprivation of sleep in architecture is so common that we probably spend two-three weeks sleeping one to two hours per night, and for what. Now I am doing something completely different, that I love. In short, you need to have balance, you need to go out, find friends, etc., and that is my best advice for any student here at Clements.