A Choice on the Pledge 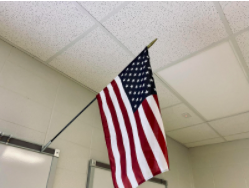 “I pledge allegiance to the flag of the United States of America and to the Republic for which it stands, one nation under God, indivisible, with liberty and justice for all.”

The Pledge of Allegiance is more than a patriotic oath. Its writing was motivated by historical xenophobia and racism and its religious ties decrease its relevance amidst a shifting cultural landscape. As such, students should be given the choice of whether to participate in the Pledge of Allegiance.

Baptist minister Francis Bellamy authored the original text of the Pledge of Allegiance in 1892, in order to commemorate the 400th anniversary of Christopher Columbus’s voyage to America. Published in a children’s magazine, it read: “I pledge allegiance to my flag and to the Republic for which it stands, one nation, indivisible, with liberty and justice for all.”

Though the words themselves were not outwardly problematic, Bellamy was motivated by xenophobic attitudes far from uncommon in his time period.

At the time, thoughts towards the nearly 2.5 million immigrants to the United States from the 1880s to the 1890s mirrored Bellamy’s; this was the time period of the Chinese Exclusion Act of 1882 and Alien Contract Laws of 1885 and 1887, among others, which led to longstanding discrimination and hate towards immigrant communities even after they were repealed and amended.

By 1917, with America’s entry into World War I and the sudden eruption of patriotism that followed, the Pledge of Allegiance had been largely established in America’s public schools. It is now considered something of a tradition in American public schools and is defended as having been a valuable part of life for more than a century in the United States.

Yet every day, children pledge their allegiance to the United States of America as violence against minorities necessitates the rise of social movements such as the Black Lives Matter movement and the Stop Asian American Pacific-Islander Hate movement. The true tragedy of the Pledge of Allegiance lies not in the words recited, which themselves are innocent, but in the internalization of the beliefs that its author held.

The words “under God” were added to the pledge in 1954, during the Cold War, to make a distinction between the United States and the Soviet Union, which was officially atheist. However, America’s religious landscape is becoming increasingly diverse, as evidenced by a rise in the number of Americans who identify with a non-Christian religion or are religiously unaffiliated. The pledge’s reference to God excludes non-Christian students.

Students cannot be compelled to participate in the Pledge of Allegiance as of a 1943 Supreme Court ruling in the case of West Virginia State Board of Education v. Barnette. Doing so would be a violation of First Amendment rights, as Justice Robert Jackson ruled. However, students still face unfair punishment as a result of refusal to participate in the pledge.

The intent behind the Pledge of Allegiance was harmful, and its language is exclusive to some. Students should have the choice of whether to stand for or recite the pledge.