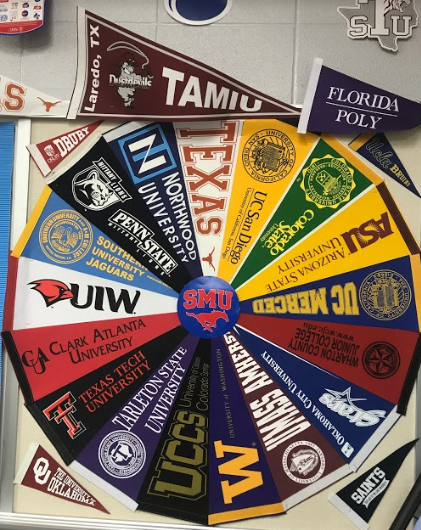 College applications are a stressful part of one’s high school career, particularly during senior year. In the school’s competitive atmosphere, these are incredibly vital to a student’s future–to be accepted by their top university choice. There are, however, people who, while regarding colleges in the same vein, find alternative routes to ensure their spots in the best schools in the country.

On Mar. 12, 2019, the public was appalled to learn that there hid a conspiracy, involving over 50 people, in regards to college admissions. It was revealed by the nation’s federal prosecutors that William Rick Singer orchestrated a scheme that would help admit children of the nation’s wealthy families into elite colleges.

The 2019 College Admissions Bribery Scandal, as it came to be known, exposed that parents paid Singer between $15,000 and $75,000 to cheat on the SAT and ACT tests, exams that colleges use to determine admission into their campuses. Another branch of Singer’s scheme was to influence college coaches into recommending supposed high school athletes for college sports.

“I believe right now that we’re getting maybe three-fourths of the story of what’s going on,” college advisor Raven Hollins said. “In a nation that loves to talk about meritocracy, we’ve always known that some people have certain advantages. It’s unfortunate, but it’s the reality.”

Hollins noted the hard-working ethic of Clements students to achieve their academic standing. Although Hollins predicted that they would be appalled at the story, they are, in fact, less shocked about the benefits and privileges that wealthier people have in the college process.

“College has been traditionally been the playground of the rich and the famous with those of a lower socioeconomic status being largely excluded,” sophomore Jacqueline Chin said. “The practice of rich parents paying their children’s ways has been well documented.”

“This entire situation is not really surprising. Deep down, I could totally see rich parents buying their kids’ way into college, but just the way they did it is worrying,” senior Chloe Scroggins said.

The situation has fostered debate among the education community in regards not to just universities but also economic statuses.

“I think that justice is finally being served to the people who think that having money makes you above the law,” junior Natasha Biswas said.

However, Hollins believes that this scandal should not be a cause for panic because it was perpetrated by only a small percent of the population and that this was merely an extreme case of cheating and not a common one at that.

“I can say, from previously working in the Office of Admissions, that what happened is not widespread,” she said. “It is not something that students should go into a panic about as they relate to when they start applying to schools and worrying if they’re going to get their shot or not.”

With the competitive edge of Clements students, they would aim higher for the best schools to receive the best education. To Sobrino, though, it does not matter where you receive your education, but how you utilize the opportunities you have.

“I think that celebrities and the high upper class place a lot of value in prestige while I believe that career success doesn’t necessarily correlate to the prestige of your university, but rather how well you used the resources at your disposal,” Sobrino said. “So, if someone goes to a small state school and graduates at the top of their class and works hard to take advantage of the opportunity to go to college, I think they could be more successful than someone who went to an Ivy League by paying their way in and only [doing] the bare minimum.”

As rising juniors prepare for college applications, Hollins is working towards ensuring students and parents that the scandal is “not a widespread thing.” She understands the pressure on students to get admitted to a good university.

“My heart breaks for all the other students, as someone who sits in this building every day and advises students and see their hearts break in their eyes or when they start to question, ‘Why didn’t I get in?’,” she said. “This scandal does not help them in terms of their psyche. I’m appalled by it and it is horrible.”