Students march for their lives 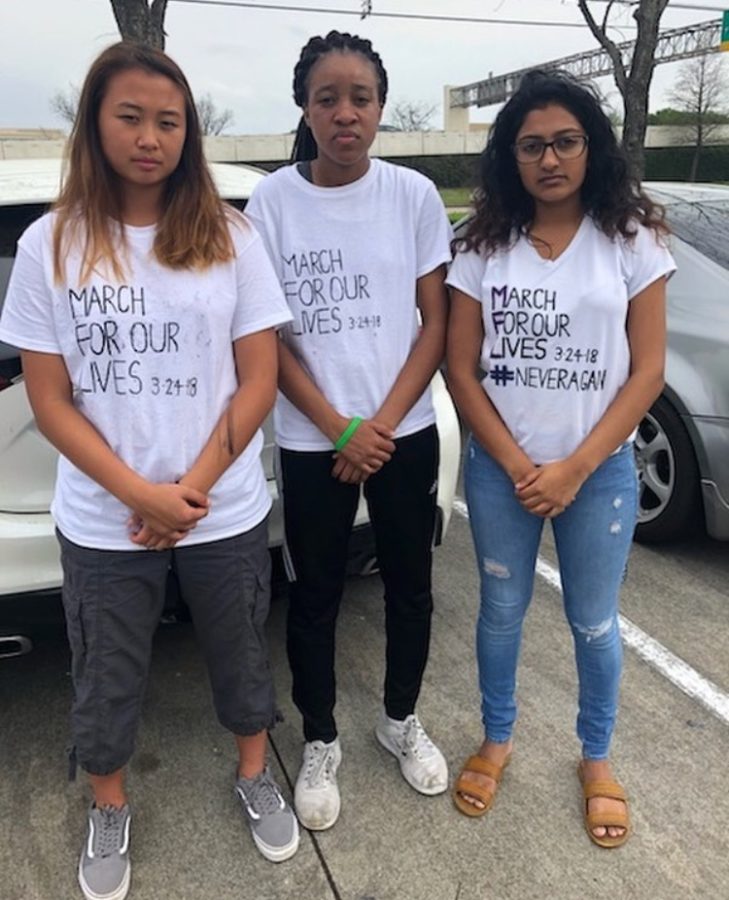 All across the United States, students and citizens fought for the lives lost due to gun violence and gun reform in the movement, “March for our lives.” This movement spurred from the Parkland shooting this past February where seventeen students lost their lives. However, this is not an unfamiliar tragedy for American citizens. As of March 2018, there have been eight school shootings where students were either injured or killed and 20 involving the use of a gun.

Although the shooting that sparked this movement started outside of Texas, it still hit close to home for junior Eric Toalson.

This feeling pushed Toalson to support the movement, and he voiced his support at the march itself, which occurred Saturday, April 24 at Memorial Park. In his speech, he expressed his frustration because of the response from lawmakers.

“It was primarily about the disgrace that our lawmakers have done for this country,” Toalson said. “They’re not representing the people that voted them into power, and I’m sick and tired of there being no change after people are constantly dying from being shot at a school of all places.”

Toalson isn’t the only student who is frustrated. Senior Chenelle Etuk says lawmakers need to ensure that guns that aren’t needed for hunting or safety should be “out of regular people’s hands.” She also addressed another layer to the conversation about guns: mental health.

“Some representatives have been saying that we should stop bullying or that the main problem is mental health, but the main problem is gun violence,” Etuk said. “Mental health is unfortunate, but not everyone who does a school shooting or kills people has a mental health issue. It’s the fact that they have the opportunities to have these weapons without major background checks and looking into this person to see why they have or need a gun.”

Besides just limiting access to guns, Etuk says that there are preventative measures lawmakers can take to ensure that no person reaches a point where they feel that gun violence is their last resort.

“There should be more opportunities for mental health facilities for individuals who are going through stuff,” Etuk said. “They should be able to go to these facilities and work on themselves so they don’t need to go straight to gun violence.”

“[President Trump] is not doing anything at all which is the whole reason why we had the march,” Anupindi said. “They haven’t even increased the age limit, and that’s such a small thing to ask for. We’ve brought up every point that we can, and we don’t know how many more people have to die before he can actually use his brain.”

Students who went to the march are taking advantage of the rights they have living in a democratic republic and pushing for a change. Toalson says he hopes that the amount of support the “March for our Lives” movement has received strikes a chord in legislation.

“I hope they realize these kids want to live through high school. They want to be able to go to school and not be afraid to not go home,” Toalson said. “I hope [Congress] realizes that it could happen to their children or their family and they go and make a change in the laws.”

Outside of the motivation for the march, the march itself wasn’t a movement that involved teens alone.

“There were young people, old people, children, people of different colors; it was amazing because you didn’t see one group of people and everybody was happy, peppy, smiling and we all walked in unison chanting,” Etuk said.

Etuk went to the march in a group that included senior Evelyn Huang who also says she enjoyed the inclusive environment.

“When we arrived, they were already marching, but when we went towards the group, they were very welcoming and told us to go in the front,” Huang said. “We chanted a lot and we were on the side [of the street] and the cars that would drive past would honk to support us. There were actually more people than I expected.”

Despite the gun politics involved, Anupindi, who too attended, says that this movement is more than just politics.

“This isn’t really politics. It’s something I feel like everyone should be involved with,” Anupindi said. “There are children and teachers dying, and I feel like everybody should have a say in this because one more person could make such a big difference.”

Huang and Toalson are both students who want everyone to be involved in this push for change.

“It doesn’t matter what age you are or who you are you can always join and your voice will be heard,” Huang said. “I hope the government finally sees this as a real problem and takes immediate action on these problems and they listen to the people.”

“Try to get your voice out there. Try to get your opinions heard,” Toalson said. “We were given a voice, we live in a democratic republic, we have the liberty to where we can use that voice and speak out for what we believe in, and I strongly encourage everyone to do so.”

“The fact that they’re criticizing children for going out to try to make change is kind of hypocritical because if you look through history so many times teens have risen up and tried to enforce change,” Toalson said. “When our current adults in legislation and Congress were teenagers there was student held riots against the Vietnam war. There’s history repeating itself, so the fact that they’re trying to discredit us by saying that we’re too young to know what we’re talking about, well I don’t think that’s true.”

Toalson says he hopes this movement isn’t just “another news story” or “statistic.” He says he believes that this is a real issue that students are valid in their push for action.